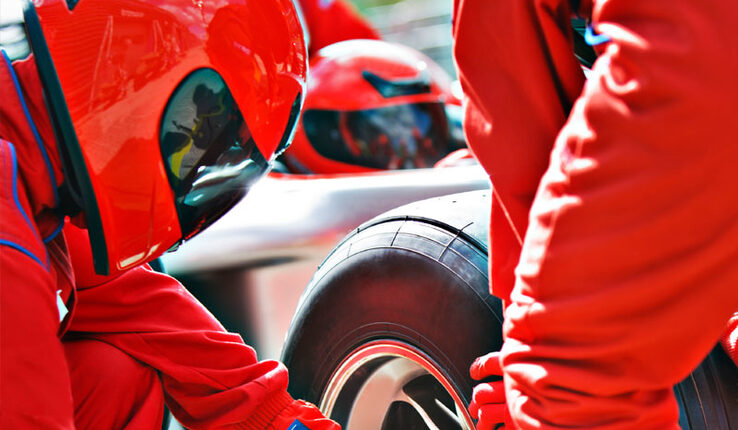 There are many noises that fans of Formula 1 instantly recognise in the heat of a Grand Prix. The ear-splitting sound of high-revving engines, the sudden power downshift put-put-put in heavy braking and the scream of airguns in the frenzy of a pit change.

In fact, so sublimely coordinated are the crew in a pitstop that F1 teams only want to hear two sounds – the four-wheel guns firing twice (loosening the wheel being replaced, then tightening the new one) in perfect unison then a screech of tires as the driver exits the box. Any other noise indicates that something in the quest to shave split seconds has gone wrong.

Wheel guns are pneumatic air drills powered by compressed air or nitrogen. When a driver comes in for a pitstop, the team stand primed and poised with eight – one for each wheel plus a spare. The wheel guns used in F1 have a heck of a kick – they spin at greater than 10,000 rpm and supply a torque of >3,000 Nm. That’s considerably more than a typical engineer’s or builder’s air drill and takes considerable skill, not to mention strength. Naturally, F1 wheel guns are expensive – at around £7,000 per unit. Italian manufacturer Dino Paoli have revolutionised F1 air drill technology and now supply nearly all of the teams.

Some F1 teams have flirted with battery-powered wheel guns though lithium battery technology has yet to quite catch up with compressed air capabilities. Teams even shaved fractions of a second off pitstops by using helium in their compressor systems for wheel changes until a change to rule 12.8.4 in 2021 prevented the use of the gas we most often associate with lighter than air balloons. The FIA cited reasons of safety (as sub-two second pitstops suddenly became commonplace) and sustainability because helium is a scarce resource that cannot easily be manufactured.

So tight are the timings in pitstops that F1 wheel guns don’t even have a directional switch. To flick it one way or the other would cost a millisecond so the first time the trigger is fired it will loosen and the next automatically tighten.

Compressed air systems are also used in the jacking systems that F1 teams use and even the drivers have been known to cool off between testing and qualifying sessions with a blast of safely delivered compressed air.

It’s not just on the full-size Formula 1 cars that compressed air is used either. The governing body FIA’s ‘F1 in Schools’ initiative challenges students around the world to design, manufacturer and race miniature racing cars powered by compressed air. And in the F1 Game Zones, where fans can experience the thrill of a race in simulators, pit crews of the future can time their wheel changes using life-like compressed air wheel guns.

There may be a lot of noise in the adrenaline-fueled, breakneck speed of Formula 1, but you could also say that much of F1, and all of the buzz around it, is really just a whole lot of compressed air.